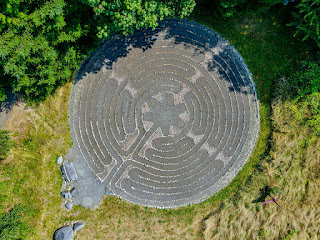 So if anyone is in Christ, there is a new creation:

everything old has passed away;

see, everything has become new!

A few years ago at my weekly support group meeting, I was listening to my friend Anna reel off a familiar litany of complaints about caregiving for her elderly mother. Her mother had never uttered a word of thanks for Anna’s sacrifices, and whenever Anna made a tough decision regarding her mother’s care, her five absent siblings lobbed nothing but criticisms at her. I had heard her story many times.

But then, in the middle of her rant, Anna’s voice faded and she looked at us with the startled eyes of a person who has just experienced an epiphany. “You know,” she said, “this story isn’t working for me any more. I need a new story. I’m not going to tell this story any more.”

Recalling Anna’s words today, I realize that for many years I’ve been telling the same old story about my history regarding racism. And I need a new story because that old story isn’t working for me any more.

It’s not a bad story. It includes coming of age during the 1960s Civil Rights Movement, deeply empathetic with attempts to overturn Jim Crow segregation, wishing I could be a Mississippi Freedom Rider registering black voters. I argued with my parents about why it was not possible for the black woman who cleaned our house “to pull herself up by her own bootstraps.” My personal heroes were John Kennedy, Bobby Kennedy, Malcolm X, Medgar Evers, and Martin Luther King Jr., and I grieved when each one was assassinated.

I volunteered and taught school in Chicago’s minority neighborhoods. As a young mother, I was on an interracial scholarship board, and my family welcomed five foreign exchange students (two non-white) to our home. My husband—who attended the 1963 March on Washington—and I had close black friends, and he taught college programs for African American and Latino students. I thought I knew all about racism. I’d read the books, watched the movies, did the work, got the t-shirt.

But only now am I beginning to realize how very little I know about racism: about what it’s like to wake up every morning in a non-white body without white privilege. Actually, I know squat about that. How could I have ever thought I did?

I am at that point. We in this country are at that point. Things have changed regarding race since the 1960s, and not always for the better. In many ways, racism in the U.S. has become insidiously, devilishly worse. It is embedded in our institutions, from government to the prison system to banking and the church. We need a new story, a more honest story, if we expect to find our way out of this labyrinth we’ve been constructing for many, many years.

The films, readings, and conversations in my Sacred Ground group are helping build a new foundation for these new, sometimes frightening times.

Wright famously stood in the witness stand and pointed across a crowded courtroom to the white man who had murdered his fourteen-year-old grandnephew, Emmett Till, and said, “There he is.” Part of my new story will be looking for Jesus in others who have their backs against the wall yet have been able to rise and courageously speak the truth.

In Waking Up White, Debby Irving helps me realize that despite my empathy for minority populations and causes, as the product of an affluent, white culture, I’ve been blissfully ignorant of the privileges I’ve lived with all my life, precisely because I’ve lived with them all my life.

I’ve never had to have “the talk” with my sons about where to position their hands on a car’s steering wheel when stopped by the police; or what to do when they go into a store and find themselves being followed by a security guard; or how to respond in the awful event someone puts a foot on their necks.

The fact that I have not had to have these conversations with my children bears witness to my white privilege—and theirs. Another part of my new story will be discerning when my privileges are preventing others from fully realizing the lives God intends them to have.

My old story was a good story, but it’s past. Finding my new story won’t be easy and it will take time. But I want to try because I believe that I am not yet that new creation God wants me to be: someone who responds to the realities of the present with a sense of equality, wisdom, courage, and hope, and not someone clinging to old, irrelevant stories.

Your ancient ruins shall be rebuilt;

you shall raise up the foundations of many generations;

you shall be called the repairer of the breach,

the restorer of streets to live in.