Resources for Juneteenth, from your Grace Community

Thank you to the members of our Grace Community for sharing some of the following resources with us.

Juneteenth is the oldest nationally commemorated celebration of the end of slavery in the United States.  It originates in Texas, in June 19, 1865, over two years after the Emancipation Proclamation:


"The Emancipation Proclamation itself, ending slavery in the Confederacy (at least on paper), had taken effect two-and-a-half years before, and in the interim, close to 200,000 black men had enlisted in the fight" (PBS.org)  Read more about the history of Juneteeth here.

I'm so grateful Carmella Basco-Yu, a member of Grace Church's youth group, agreed to share this essay with our community.  It was originally published on Facebook. __________________________________________
I would like to take advantage of this day, and reveal what I have experienced being a person of color and a person of mixed races growing up in a predominantly white community. And in no way am I comparing my experiences to the struggle the black community faces and the injustices they endure. This is my unique perspective.
I moved to Washington in 2010 while I was in second grade. I had moved from a part of North Carolina that holds a great amount of diversity, and at the time I did not think anything of it. But as I entered middle school, the more and more that I began to realize that there are not many that looked like me. I would often find myself to be the only person of color in my classes, and if there were other people of color in those classes it would only be, on a… 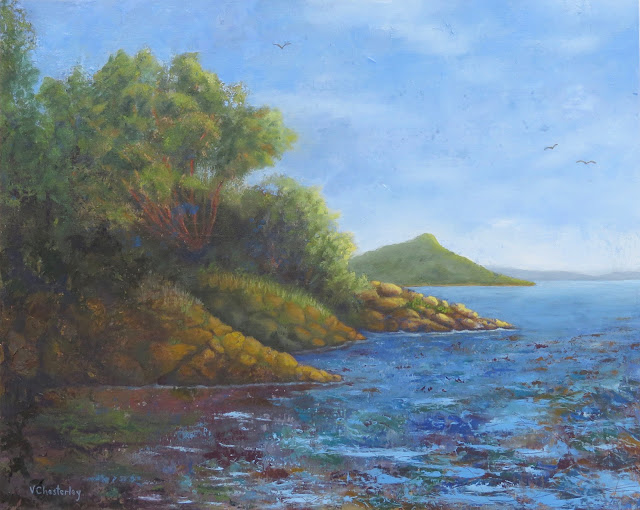 The Gallery at Grace Presents "Visionary Landscapes:" a Show by Vivian Chesterley

Visionary LandscapesVivian Chesterley
Vivian Chesterley’s landscapes pull you in for a second look. Working in both realism and disrupted realism genres, her work is full of color, and exhibits a variety of painting techniques used to explore Northwest landscapes in various degrees of realism to abstraction.

Florrie Munat of Grace's Pastoral Care Team has crafted a list of sources for those of us who suddenly find ourselves at home (and that's most of us!). -----
In these days of COVID-19, some of us find ourselves searching for new ways to occupy our time beyond binge-watching “The Office” or “Grey’s Anatomy.” Others of us are busier than ever with job challenges or taking care of children who are home from school. But all of us can use a break for self-renewal and connection with others. Grace’s Pastoral Care Team offers this miscellany of resources for learning, enjoyment, prayer/meditation, and connection. This is by no means a complete or even representative list! We hope you’ll add your own ideas in the comment section at the end! --Florrie
Outdoor Resources Grace Grounds – Walk the Grace labyrinth (in the upper parking lot), or roam the trails. Meditate or journal in the Memorial Garden.
Bainbridge Island Parks – Enjoy the more frequented parks like Battle Point, Waterfront, or …