Maundy Thursday: An Invitation and a Memory from Florrie Munat

Tonight, join us and others worldwide, remembering Jesus' commandment to love one another and to wash each other's feet.  Find a simple liturgy that you can print to use as you share a meal, wash feet, and pray at home here. 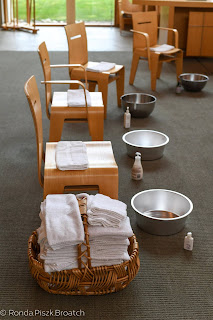 Stepping Into the Mystery: A Memory of Maundy Thursday, by Florrie Munat

“After he had washed their feet, had put on his robe, and had returned to the table, he said to them, ‘Do you know what I have done to you? You call me Teacher and Lord--and you are right, for that is what I am. So if I, your Lord and Teacher, have washed your feet, you also ought to wash one another's feet. For I have set you an example, that you also should do as I have done to you.’” --John 13:12-15

When I arrived at Grace many years ago, I had no intention of washing anyone’s feet. For years I’d avoided Maundy Thursday services precisely because I did not want to wash someone else’s feet. Washing a stranger’s feet was just too weird…too personal. I would feel embarrassed and…well, vulnerable.
Eric Mason, Grace's Associate Priest at the time, preached on the Last Supper. He suggested that the disciples felt confusion and despair when Jesus stripped off his clothes, wrapped a towel around his waist, and began to wash their feet. This was not the behavior of the man they accepted as their Lord and Teacher. This was the behavior of a slave, of a female slave. At first Peter refused to let Jesus wash his feet. He didn’t understand. But Jesus asked his disciples to step into the mystery anyway.
At the end of his homily, Eric invited us to do whatever was in our hearts: leave, stay for foot washing, or just stay.
Because I had paraded in with friends, I was sitting with them in an unfamiliar front row seat. My friends all left in silence. I stayed, for no particular reason. Mesmerized, I watched women carry silver bowls of warm water into the sanctuary, then retreat to the kitchen and return with wicker baskets filled with white towels, bars of soap, and skin lotion. The silent choreography of the women assumed a dreamlike quality, and I closed my eyes. When I opened them I saw that two or three people had begun washing feet.
I also saw that a man had appeared in a chair near me. He had removed his shoes and socks and was sitting quietly, looking straight ahead. Without thinking, I rose and slid a silver bowl in front of him, and he placed his feet in the warm water. For the next several minutes, I concentrated on the logistics of washing someone else’s feet. Should I lift and hold each foot out of the water when I applied the soap? Should I use massage? Should I dry each foot with a towel before applying lotion? My hair fell over my eyes so I could see only the bowl and the man’s feet, which shone through the water like white porcelain. When I finished, I moved the bowl aside and looked up at him.
The man’s eyes were closed and he was weeping. Then I began to weep and we hugged, him sitting, me kneeling – perhaps in acknowledgement of our scarred humanity. After a few moments he put on his shoes and socks, and we left the sanctuary separately.
On my drive home, I experienced one of those Mary Oliver “What was that beautiful thing that just happened?” moments. And although he had not spoken, at that moment in the car I knew that his tears were for his mother.
A couple of weeks after Easter, the man and I saw each other at coffee hour and we shared another hug. By then we’d learned each other’s names: Scott and Florrie. We said that when we’d come to church, neither one of us had anticipated taking part in foot washing, but we’d each felt called to it.
And he told me that the week after our meeting, he had helped his mother move into an assisted living facility. He had navigated this transfer with calmness and patience, allowing his mother and himself the time they needed, which he admitted was not his usual practice. Having moved a loved one into a nursing facility myself, I understood some of the heart-shredding emotions he might have experienced while helping his mother through her transition.
Foot washing takes place tonight. Consider stepping into the mystery.
--With gratitude to Scott Kennedy
--Florrie Munat