Conversations with My Brother: A Reflection by Susan MacDonald

CONVERSATIONS WITH MY BROTHER 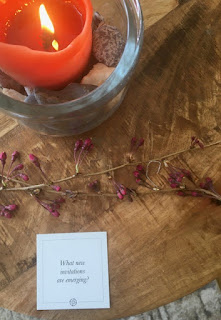 In recent times, I’ve noticed a deeper connection emerging out of the roots of relationship with my younger brother Tom. In our early years, he was the entertainer and adventurer - I looked forward to his music and humor that drew others in. He loves to make people laugh and think, I’m the more quiet and reflective one. Continents can’t separate us. A few years ago, with more experiences to define us, we began talking more honestly, in friendship, about deeper details of our thoughts/lives.

Kahlil Gibran, writing on friendship, reminds: “Your friend is your needs answered.
He is your field which you sow with love and reap with thanksgiving.”

~
When I first left for West Africa in 2003, I had no clue how my heart would be captured and formed by the experience, nor how long I would remain. I think my brother, Tom, had a clue. Now, after 16 years, I’ve returned to the Pacific NW to assimilate back into this US culture. Reminders still show up on my iPhone’s daily screen: Good Morning! The temperature in Cape Town is 73 degrees.

Most days I’d describe the large experience of these 16 years like this: “While away, my own soul was re-formed, my heart gentled, my intentions clarified, and I learned to let go of many things; my heart sees with new eyes.” And, in all honesty, by the time I returned home I was also worn out. “And she’s still working through it,” Tom would say kindly. It takes time.
~
My Work in Africa. In Burkina Faso, Togo, Ghana, Mali, and Senegal the goal was to come alongside others who were responding to the HIV/AIDS pandemic on the continent through the structure of local churches and communities. Those years created a lot of crowded graveyards in Africa. Later, based in South Africa for ten more years of similar work, I travelling broadly to multiple countries in Africa and Asia. Sometimes I went to see Tom in Austria for a break.

I experienced QUITE A LOT. We are too, all of us, experiencing A LOT now. No one travels, each week is different. By mid-March, 2020, Tom and I had a pattern of talking and writing often about many things. Initially, he was writing with rawness:
~
TOM:  12th of March, Thursday:  Sue, the real revelation began while skyping with you on Saturday. You said that Seattle was then the epi-center of the Corona Virus infection and the city was living under restrictions, the same as we were in Austria! I mentioned to you that we realized very slowly the week before that we all needed to take this seriously. Steffi scolded me, “Papa, you’re not listening! You’re not permitted to see me because I teach children; you can’t see Mama because she’s a doctor at the hospice.” I felt like a leper. But the Austrian government’s statements took a while to sink in.  Universities were closing, but we never thought we would be ordered not to leave our houses except for dire needs, wash hands, and keep a meter’s distance. . .  just as our neighbors in Italy. I suddenly realized that this is a worldwide situation. It causes pockets of panic. We have never seen this and we do not know how long it will last.

Reflecting on Tom’s words, I remembered that learning to quell fears was a process for me in Africa; one such time, I arrived in Togo in the midst of a coup and society was breaking down. What I began to learn then was not about extinguishing fear but listening to it.

This tends to be the basis for most of my life responses now: let go, take care of myself, listen to my anxiety, listen to Spirit, learn from others, and live into a compassionate response. I shared this with missional and humanitarian workers in my own work. Some family members may still wonder what in the world all that was about! . . .  I’d say it was about formation - my own.
~
My Brother Tom’s Journey.  Decades earlier, Tom began serving needs in far off places in his 20’s. First, it was a place of compassionate response in Afghanistan. Then he settled in Salzburg where he did youth work and met his wife. Later, as a pastor, he created an English-speaking congregation which also serves immigrants. Occasionally he sent a letter. I think it was there that he became a pipe smoker, like Tolkien, whose work inspires Tom. Now, in March 2020, we had a theme of talking about rituals: I like preparing curry and sent two recipes. He wrote:

TOM:  16th of March, Monday:  On this day I started a new ritual. I walked 20 minutes to a nature reserve and started smoking my pipe again. Two hours. Two pipes. In between, Stefanie and Susi bantered with me over What’s App and sent Corona jokes. I remembered a joke I shared when you laughed so very long with tears in your eyes. And I was encouraged. So, I starting jogging again and made your South African curry dish.
~
Reconnecting. Not a surprise, when we reconnected a few years ago (a great story), our relating coalesced into mutual support, and eventually focused on the current pandemic. We talk often now: 9pm Austria /12pm Seattle. We listen and we write, we talk and ask questions, we cry and we care, we notice hope. Tom says, “Shabbat in Hebrew means: Stop working and just focus on the basics.”

TOM:  18th of March, Wednesday:  Yesterday I smoked a pipe and kept meeting people I had not seen in years. We bowed, put our hands together and wished each other Namaste. Then I went shopping for my meals for the next three days. All of a sudden I had great energy again. And I started to write. I finally started to write again! I also corrected and amended many passages in “Walking. .” Then, worked through the whole manuscript, it was great. There are so many things I now see differently. So, I went jogging again and was able to run 6 KM.

Currently, our chats feel hopeful. My thoughts are that we live best when we give and receive compassionate support and learn to listen: internally – for ourselves, and externally – for the world. Summarized, I think it’s a good pandemic response. This is the gift of my learnings and this is what Tom and I are doing for each other. . .  a gift of friendship for unravelling times.

Susan is a relative newcomer to Grace Church, arriving last summer. She may be recognized for her photo exhibition at Grace in Nov/Dec titled, Life Flows - In The Face of the Other. Susan has come from Cape Town, South Africa to live in her former community of Poulsbo after a long journey in Africa and Asia, initially in response to the HIV/AIDS pandemic in 2003. In later years, she travelled broadly to support and counsel humanitarian and mission workers. She now refers to herself in these ways:

Semi-retired and continuing to live forward as
A reflective writer, photographer, lover of life and people, in generosity of spirit . . .
Available as friend, spiritual director, creator, speaker, consultant . . .
Alive in the very Wide World . . .
Explorer of contemplative practices, relating with others in spiritual understanding . . .
Living with authenticity . . .
Being
Me.

Kimberly said…
Thank you, Susan! I've appreciated my siblings so much during this time. My sister lives quite close and though I don't see her as much as I used to right now (proper social distancing)! I feel so connected and happy for our mutual support.
April 17, 2020 at 3:31 PM

Heather Paar said…
Thank you Susan. So lovely to hear your “voice” and have a peek into your brother’s life, and your communal lives. I can feel the loving support you share and it warms me.
April 18, 2020 at 9:56 AM